Stonewall, the UK’s leading charity for lesbian, gay, bi and trans equality, has released new research that shows bi people are significantly less likely to be out than gay men and lesbians, whether that’s at home, in education, at work, or as part of a faith community. The study also reveals the impact bi-erasure and biphobia has on health and well-being of bi communities.

Bi people are three times less likely than gay men and lesbians to be out to all of their family.

The report, based on YouGov polling of over 5,000 people, of whom 1,769 identified as bi, reveals that bi people are three times less likely than gay men and lesbians to be out to all of their family (20 per cent compared to 63 per cent). While one third of bi people (33 per cent) aren’t open about their sexual orientation with any of their family.

Bi people are often a forgotten part of the LGBT acronym.

Bi people are often a forgotten part of the LGBT acronym and can face ‘’double discrimination’: not only do they face abuse from straight people, but also from lesbian and gay people.

As one respondent to Stonewall’s Bi Report said: ‘Being bisexual means finding yourself excluded by gay people and straight people in social settings. I only tell my friends about my sexuality, meaning it is hidden from my family and my work colleagues. Bisexuality is a hidden sexuality through people’s lack of acceptance.’ Kendra, 32 (Scotland)

Stonewall research further shows how experiences of biphobic discrimination and rejection from family and friends significantly increase the risk of poor mental health for bi people. Nearly three in five bi people (59 per cent) reported experienced depression, compared to just under half of gay and lesbian people (46 per cent). Meanwhile, over one in four bi people (26 per cent) reported self-harming compared to one in ten gay and lesbian people (11 per cent).

Nancy Kelley, Stonewall’s Chief Executive, said: ‘For the first time we have research specifically looking at what life is like for bi people in Britain. What we’ve found is that across the board biphobic stereotypes and prejudices are making life harder for bi people and, too often, their experiences of discrimination are either undermined or ignored altogether.

‘This stops bi people in our communities from feeling able to share really important parts of their lives with those around them, hurts their mental health and gets in the way of them accessing appropriate help and support when they need it.

‘We all need to learn more about the issues bi people face, and work harder to make sure they are welcome and supported in our schools, workplaces, and communities. It is down to all of us to tackle ignorance about bi identities, and to challenge the damaging bi-erasure and biphobia that bi people of all ages experience.

‘We want every LGBT person to thrive and be confident about who they are. Accepting bi people without exception is essential to creating a world where everyone, everywhere is free to be themselves.’ 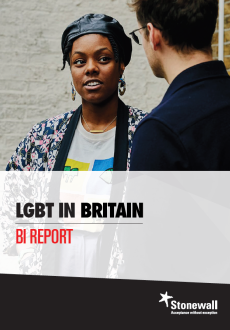 Return to our Bi Visibility Hub.

Vaneet speaks about #BisexualMenExist and why bi visibility is so important