I think that my child might be gay. How can I be sure?

Until your son or daughter comes and tells you that they are, or might be, gay or bisexual, you can’t know. Try not to make assumptions and let them come and tell you in their own time. Create a positive environment where your child feels able to talk to you about their sexual orientation for example, say positive things about gay people when they’re on TV and don’t allow people to say negative things about gay people under your roof. 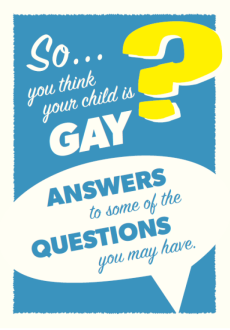 So...you think your child is gay?

What should I do if I think my child is trans?

You might think that your child is trans, but until they tell you how they feel, you can’t know. Steer clear of prying though, you want them to know they can come to you in their own time. If you try to pressure them, it might just make them close up more. What you can do is listen to and respect their decisions about how they want to express themselves and their gender – if they prefer a nickname, for example, and not pressurising them to wear certain clothes.

But I don’t agree with it.

The truth is, if you’ve got a problem with the idea of your child being gay, you’re going to have to live with it and accept it. The best thing you can do is to put your feelings about ‘being gay’ to one side and remember that, regardless of your son or daughter’s sexuality, you love them and want them to be happy. As for other family members if they don’t react well initially, put some rules in place and establish what can and can’t be said in front of your child.

Talking about it is a good thing

One thing you can do is give them the information that they need to approach relationships and sex responsibly. Gay and lesbian young people often lack access to information about sex and staying safe so, even if you feel like you can’t talk about it personally, you should at least be able to point them in the direction of the information they need.

Won’t being gay make their life harder for them?

What makes life hard for gay people is people rejecting them. New laws have made our country fairer and more equal. Gay people can now get married and have children, there is legislation to protect LGBT people in the workplace. There are more gay role models in the arts, politics and sport and those people who have a problem with gay people are an increasingly small minority. In modern Britain,LGBT young people can grow up, live happy lives and fall in love with people just like anyone else.

LGBT Cymru Helpline - General information, advice and confidential support and counselling in many areas of life and around various issues that people might experience. Mon & Wed 7pm-9pm 0800 8402069.

FFLAG Wales (Family and Friends of Lesbians and Gays) - Confidential telephone help line, support groups and the provision of information so that families and friends may be helped to understand, accept and support lesbian, gay, bisexual and trans people with love and pride. Helpline 0845 652 0311 (calls charged at 2ppm plus network charges) or email info@fflag.org.uk

Coming out as a young person

Coming out as an adult

So...you think your child is gay?