LGBT in Wales - Work Report is Stonewall Cymru's report based on YouGov research with over 800 LGBT employees, revealing troubling discrimination in Wales’s workplaces. 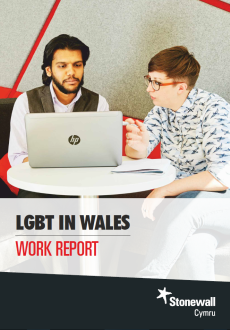 A customer, as they were leaving my counter, said, "He was a faggot, that's disgusting, I don't want to be served by him" loud enough to be heard by several people.

I still feel pressure to keep quiet about my sexuality. I was working part-time over Christmas, and at least two colleagues made homophobic and transphobic remarks. I was too anxious and fearful of rejection to reprimand them or tell them that I was gay.

The last four job interviews I've had have all thought it to be okay to ask when I am having my gender reassignment surgery and how long I would be taking off work when I did so, before turning me down for the job applied for. My last phone interview said that my retail skills were not good enough to fill the position of customer assistant even though I have 10 years of retail management experience.

What can you do

Find out about Stonewall Cymru’s workplace programmes, events and more

Come Out For LGBT (Cymru)