Conducted in partnership with the Centre for Family Research at the University of Cambridge, Stonewall’s School Report 2017 surveyed more than 3,700 lesbian, gay, bi and trans young people aged 11-19, including 267 living in Wales. The School Report Cymru 2017 is based on the responses of those participants living in Wales.

This study shows that while some LGBT young people in Wales are accepted, for many bullying, discrimination and exclusion are part of their day to day lives. 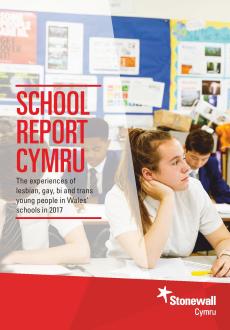 I got pushed in corridors, kicked and told that I was a ‘nervous wreck’ when I would cry about the bullying. I’ve never really got over it.

Nothing LGBT has ever been discussed in a positive way at school.